Trying to Trip Jesus up: What was that all about?

Posted on March 31, 2015 by honestaboutmyfaith

Jesus had arrived in Jerusalem, he had been to the temple to remind people that we shouldn’t put any barriers between people and God and he spent the next few days talking with people about his heavenly father.. 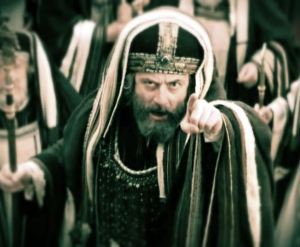 Sometimes Jesus initiated the theme and at other times the religious leaders came and asked him questions. The questions that they asked don’t generally come across as genuine or enquiring, rather they seem designed to trip someone up.

One of the clearest examples of this is in Matthew 22:

15Then the Pharisees met together to plot how to trap Jesus into saying something for which he could be arrested. 16They sent some of their disciples, along with the supporters of Herod, to meet with him. “Teacher,” they said, “we know how honest you are. You teach the way of God truthfully. You are impartial and don’t play favourites. 17Now tell us what you think about this: Is it right to pay taxes to Caesar or not?”

So the Pharisees send some of their supporters along with supporters of the King to ask Jesus if it’s right to pay taxes or to Rome or not. It’s a bizarre question, because they themselves would have wanted to say no, they recognize that if Jesus says no he could be in trouble with the Romans and if he says yes then he could lose favour with the Jews.

Jesus recognizes that they are trying to trick him but he stays calm and comes up with a clever answer.

18 But Jesus knew their evil motives. “You hypocrites!” he said. “Why are you trying to trap me? 19 Here, show me the coin used for the tax.” When they handed him a Roman coin, 20 he asked, “Whose picture and title are stamped on it?”21 “Caesar’s,” they replied. “Well, then,” he said, “give to Caesar what belongs to Caesar, and give to God what belongs to God.”

I have to be honest, I hate it when people ask stupid questions to cause problems.

I have to be even more honest. When I am under pressure or am stressed then I am more likely to snap back when being wound up.

Jesus was under pressure. He knew that his death was a few days away and yet he answered calmly.

As we saw yesterday, Jesus was really angry in the temple. He was irritated by what was going on there and he was also concerned about the way the Pharisees were abusing their position. He accused them of placing unrealistic burdens and expectations on people as well as doing things for show. (Matthew 23.1-5).

Jesus might have snapped back, but he didn’t. Rather than playing the same game of ‘you’re tying to trick me and so I’ll try to trick you back’, Jesus just gave an answer and moved on.

The religious leaders were obsessed by their rules and detailed interpretations of the Old Testament law but they had ignored the key points of it such as justice, mercy and faith. Jesus compared them to a cup or a dish that may look shiny clean on the outside, but the most important thing is whether it is clean on the inside (Matthew 23.23-26).

Religious people, like to look religious but Jesus encourages us to be more genuine. 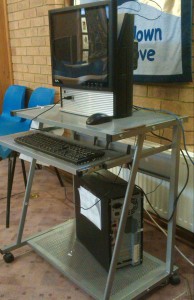 Yesterday, I was setting up some computers for an event we are running at the church. The computer in this picture is an ‘all in one’ style of machine with the processor, memory, hard drive etc all built-in to the back of the screen. The computer on the bottom of the trolley is broken. I guess that most people would think that computer was in the box at the bottom, not the screen at the top.

I had plugged in and turned all the computers on and I then went around connecting the Ethernet cables (they provide an internet connection) and all the machines connected except this one.

I checked the cable and tried it in another socket but that didn’t work either and then it dawned on me that I was plugging the cable into the broken computer on the bottom of the trolley. As soon as I plugged it into the working machine, everything was fine.

The box at the bottom looks right but it is broken and useless inside. The good news is that there is hope for it and that it can be fixed!

I am imperfect and Jesus is restoring me. 🙂

The religious leaders tried to make Jesus look ridiculous but he responded rather than retaliating as he explained how things could change.

We need to stop pretending to be religious and start working on what really matters to God.

I guess that one of the things that made this time hard for Jesus was the fact that he was going to die to rescue the people who were attacking him. Jesus died to offer salvation to everybody and it must have been tough that some of the people who he was trying to help were throwing it all (fairly aggressively) back in his face.

Some thoughts for us to ponder.

Are we more concerned about how we look and appear to others than we are about facing up to and dealing with what is really going on in our lives?

Do we try to make other people look bad so that we might be more popular?

It strikes me that when church goers disagree that it is to do with the minor things of faith. When we focus on the important things such as justice for all, the mercy of God and faith then we are united. If you are a Christian, take some time to think about which aspects of your faith you are focusing on. Are we concentrating on the things that really matter to God?

Will we love and treat people well, even when they are trying to wind us up?

Will we accept that we are imperfect and call on God to fix and transform us?

Tune in tomorrow for

A Meal to Remember: What is that all about?

Or rewind to read about

Trashing the Temple Courts: What was that all about?

Throughout this week, I’ll be writing a series of blogs called ‘What is it all about?’ that help us to think about the events that led up to Jesus’ death and resurrection.

Hi, my name is Graeme and I’m married to a very patient wife. We have 4 children, 2 rabbits, a terrapin (and not a lot of peace and quiet!). I’m a Regional Minister for the Eastern Baptist Association in the UK (the views expressed in this blog are my own) and I am especially interested in making Church accessible to people who have no church background and also in how we disciple people in order to equip them to live out their faith in the 21st Century.
View all posts by honestaboutmyfaith →
This entry was posted in Bible, change, Easter week explained, Faith, Holy week explained, Life experiences, Who am I and tagged clean on the inside, don't pretend to be okay, fix you, focus on what really matters in Christianity, jesus can fix us, Jesus should we pay tax, Matthew 22, Matthew 23, Pharisees placed burdens on people, Pharisees question Jesus, pharisses like cups plates, religious leaders question Jesus, render to caesar, transformation. Bookmark the permalink.

5 Responses to Trying to Trip Jesus up: What was that all about?