Why do we get stressed about the things that we do?

Posted on August 9, 2014 by honestaboutmyfaith 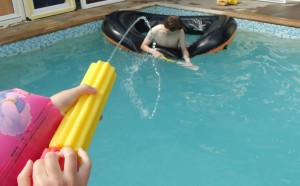 I’ve been away this week staying with my in-laws. We’ve had a great time catching up with family members who are back in the UK, we have had lots of fun and we have all eaten much more than we should have done.

When you are trying to have some space and people interrupt you it’s easy to get annoyed, but how are they supposed to know you were trying to be quiet? Did you go somewhere away from others or did you expect everyone to just be miraculously quiet?

Do you ever feel disturbed when your phone rings? Did you forget it has an off button? Many of us feel harassed, that we never have a break. Turning our phones off sometimes is a good step towards finding rest.

We get annoyed often when things break. This is really weird when you think about it because we all know that our cars, fridges and cookers won’t last forever but we still feel it is unfair when they stop working. If you get annoyed when things stop working you either haven’t had them very long or you have unrealistic expectations.

Think about the things that bother you. Are your expectations realistic? How can you plan more effectively to avoid frustration?

Sometimes I overreact or get angry unnecessarily because I am too ‘me centred’. As I write this, my girls are watching ‘Frozen’ again. The words to that song should be ‘Let it go, let it go, can’t stand this song anymore’. It’s easy for me to get annoyed with them, but when did the universe begin to revolve around me? Is it right for me to get my way in everything? A lot of the things that bother me wouldn’t if I realized that everything shouldn’t have to centre around me and my likes and preferences.

Next time someone is annoying you with their habits ask yourself if it really matters? You may even want to change your focus by thinking about what habits you have that may frustrate others. Trying to do something kind for others on a regular basis is a good way to ensure we don’t get too me centred.

Sometimes I overreact or get angry unnecessarily because I think my problems are bigger than everyone else’s. The news is full of real suffering, people dying, people having lost loved ones, victims of crime etc. Any of us who have faced these and other losses will know how natural it is to be upset. Do the things we usually get worked up about actually compare to these? When I miss something on TV or if I didn’t have a holiday abroad this year or if I break a nail, is it really the end of the world? Unless we focus on the wider world and what real and serious problems look like then we will continue to get upset about the small things.

Sometimes I overreact or get angry unnecessarily because I let my feelings take control. When you next feel angry, count to 10 and pause to consider if you are really justified in feeling this strongly. Feelings are important but we need to try to be in control of them.

Next time you get an accusing e-mail or text don’t start typing and hit reply, take some time out to try to get some perspective. Try and be in control of your responses, don’t let anger control you.

This is what I try to do when I am angry.

1. Ask God for his peace: God’s peace works in a way that is beyond our understanding and it can guard our hearts and minds (Philippians 4.7). Two angry people = disaster so pray for peace first before you respond.

2. Think about and ask God to show you why the other people involved are behaving the way they are: Understanding why a person has behaved a particular way helps you to respond appropriately. Someone who spreads rumours about you because they want to be more popular needs to be treated differently to someone who does it because they hate you. Someone who has hatred towards you can’t be reasoned with effectively but someone who has just made a bad choice can. Both people are behaving in an unacceptable way, it is how we approach the situation that is different.

3. Pause and consider the best way to resolve things: Having prayed for peace and thought of the other person consider what would be a wise way to deal with the situation. Telling someone who doesn’t realize they have hurt you that there is a problem between you is one of the hardest things to do. Sometimes it is easier to involve someone else as a referee. If you do this don’t take your best mate, try to ask someone who both of you respect. Church leaders often take on this mediators role and there are other people trained in mediation who can help.

Ask yourself; is my aim to get revenge or justice? If we are seeking revenge then it is unlikely things will be resolved constructively. Enter into any discussion with the desire to see things resolved.

4. Am I willing to forgive?: Forgiveness is about letting go of our anger towards someone. We can still want justice, but it means that we let go of any hatred or bitterness that is causing us harm.

5. Don’t post of Facebook that you are angry with someone: If you make your problems public they are harder to fix. I would encourage you not to even post something vague as it just escalates the problem particularly when the others involved in the problem read replies that ask what the matter is and your reply is ‘I’ll inbox you’. They then stew about what version of what has happened that you are communicating and they may then react by posting something. Instead of fixing things, venting on Facebook makes things worse.

What bothers you? Let’s think about it and respond in a constructive way.

Hi, my name is Graeme and I’m married to a very patient wife. We have 4 children, 2 rabbits, a terrapin (and not a lot of peace and quiet!). I’m a Regional Minister for the Eastern Baptist Association in the UK (the views expressed in this blog are my own) and I am especially interested in making Church accessible to people who have no church background and also in how we disciple people in order to equip them to live out their faith in the 21st Century.
View all posts by honestaboutmyfaith →
This entry was posted in Faith, Life experiences, stress and tagged how to respond when we are stressed, stress, what bothers us. Bookmark the permalink.