Posted on May 29, 2015 by honestaboutmyfaith

Some people find it difficult to think of Jesus as God. This is a simple illustration that helps me and is useful for school assemblies or talks in church. 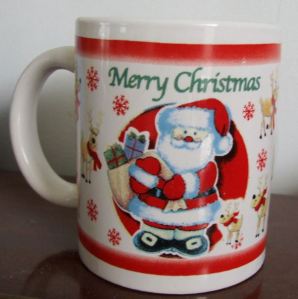 Look at the mug in the picture. What do you suppose is in it? If I was presenting this to a group I would get people to shout suggestions out.

After several suggestions, I would ask people how they can be sure of what is in it, after all they can’t see inside of it.

The Bible says that ‘no one has ever seen God’ (John 1.18) and this is a bit of a problem when we are trying to work out who he is and what he is like.

The good news is that we really can know what God is like.

Produce a glass and pour some of the water (you were wondering what was in there weren’t you) into it and then ask what is in the mug. (What was hidden in the mug is made plain by the glass). The Bible says

No one has ever seen God, but the one and only Son, who is himself God and is in closest relationship with the Father, has made him known. (John 1.18)

Jesus is God and one of the reasons that he became human was so we could see what God is like. If you want to know who God is and what is important to him then look at the life of Jesus.

Jesus is God’s gift to the world and he really is so much better than any other gift we could receive for Christmas .

Jesus was on the earth many years ago and when he went back to heaven, he promised to send the Holy Spirit who is God’s presence in the world today.

Take a drink of the water and explain that the Holy Spirit is also God’s presence inside of Christians.

Jesus said, “Let anyone who is thirsty come to me and drink. Whoever believes in me, as Scripture has said, rivers of living water will flow from within them.” By this he meant the Spirit, whom those who believed in him were later to receive. (John 7.37-39).

If I was using this illustration in a church I would go on and talk about the real privilege that it is to be carriers of the presence of God.

Juts stop and think about it, the God who made the universe, the God who raised Jesus from the dead, the God who is love, he lives in every Christian. The Bible encourages us to regularly ask God to fill us up with his Holy Spirit so that he can have a greater influence in our lives and in the lives of those around us.

I have been using this illustration for years but it was not my idea. I would love to credit the source, but I can’t remember who it was. If anyone knows or has seen this elsewhere then comment below or message me and I will add credit to this post.

I have written this up because someone asked me if I had any assembly ideas that touched on the trinity. If you have any other requests for creative ideas on a subject, feel free to ask.

This is another example of creative communication.

Hi, my name is Graeme and I’m married to a very patient wife. We have 4 children, 2 rabbits, a terrapin (and not a lot of peace and quiet!). I’m a Regional Minister for the Eastern Baptist Association in the UK (the views expressed in this blog are my own) and I am especially interested in making Church accessible to people who have no church background and also in how we disciple people in order to equip them to live out their faith in the 21st Century.
View all posts by honestaboutmyfaith →
This entry was posted in creative communication, Faith, Incarnation and tagged assembly ideas, christian assembly ideas, Christmas assembly, creative communication, incarnation, incarnation explained to children, John 1 18, john 7 37-39, school assembly, trinity, trinity explained to children. Bookmark the permalink.