Is Jesus more like a Lion or a Lamb?

Posted on April 12, 2017 by honestaboutmyfaith

As I drove along I was reflecting on how I had just been called an angry and aggressive person. I was praying about what had happened (don’t worry, I had my eyes open) and then the song ‘He’s coming on the clouds (The Lion and the Lamb)’ started playing and I listened to these words:

Immediately I felt better, after all God was going to fight for and vindicate me! Anyone who knows can tell you that I’m not an angry person and so I felt justified in my belief that God would put things right. 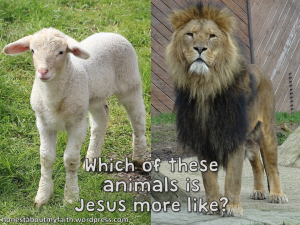 I began to hum along as I listened to the next words:

My bubble of smugness and self-righteousness popped (actually, I think it exploded) as I was reminded that although Jesus is the all powerful God that he is also called the lamb of God.

During Holy Week we especially remember the days surrounding the death and resurrection of Jesus.

Jesus rode into Jerusalem, not as a lion who would defeat the Romans but as a lamb who had come to give his life as a sacrifice to save us.

Jesus was more like a lion when he trashed the temple courts (read yesterday’s post for an explanation about this).

Jesus was arrested, beaten, tortured and executed. The Bible says that he was led like a lamb to the slaughter.

I am so grateful Jesus came into Jerusalem as a lamb, not a lion.

I am so grateful that Jesus was willing to give his life to save us. He did this even though he could have asked God to take him back to heaven at any point to escape the suffering he was enduring.

I love the way that the song reminds us that people will kneel before Jesus the lamb. We won’t kneel because we are a afraid or because we have to. We will kneel in silent awe because this is God who sacrificed himself to save us, this is Jesus who laid aside his majesty and status to rescue humanity!

What kind of lion would choose to become a lamb?

As I though about the names that I had unfairly been called, it gave me the tiniest speck on insight into the attacks that Jesus had endured and it reminded me that defending myself wasn’t important.

The Lion of Judah stood on trial. He could have said ‘Don’t you know who I am’ or roared or displayed his power in some way but instead he surrendered like a lamb being led to the slaughter. Jesus didn’t retaliate or feel the need to defend or justify himself becasue ultimately his confidence was in God and not in himself or in what other people thought of or were saying about him.

So, how about you? Would you prefer to be like a Lion or a Lamb? Whichever we would prefer, are we willing to be like both at different times as we serve Jesus?

So, my thanks to Leeland Mooring, Brenton Brown and Brian Johnson for writing and providing us with such an inspirational song that reminds us of who Jesus is.

I am hoping to write something each day this week to explore aspects of what happened during the lead up to the first Easter Sunday. If you are interested in finding out more then you might find the other posts I have written helpful.

You can listen to the song here:

Hi, my name is Graeme and I’m married to a very patient wife. We have 4 children, 2 rabbits, a terrapin (and not a lot of peace and quiet!). I’m a Regional Minister for the Eastern Baptist Association in the UK (the views expressed in this blog are my own) and I am especially interested in making Church accessible to people who have no church background and also in how we disciple people in order to equip them to live out their faith in the 21st Century.
View all posts by honestaboutmyfaith →
This entry was posted in Easter week explained, Faith, Holy week, Holy week explained, Jesus, lion and the lamb and tagged Brenton Brown, Brian Johnson, coming, Easter, easter week explained, holy week explained, Jesus is the lion and the lamb, Leeland Mooring. Bookmark the permalink.

5 Responses to Is Jesus more like a Lion or a Lamb?