Would we like Jesus to give us what we Want or what we Need?

Posted on April 10, 2017 by honestaboutmyfaith

Jesus rode into Jerusalem and the crowd cried out for him to save them. They were expecting salvation from Roman occupation but Jesus had a different agenda.

A few days later many of these same people would have been in another crowd shouting crucify as Jesus stood before them. Jesus had failed to be the saviour that they wanted him to be and so they rejected him and instead they called for a revolutionary named Barabbas to be freed instead.

Sadly Barabbas didn’t free them from the Romans and in an act of supreme irony, their rejection of Jesus led to his death which in turn provided salvation for the whole world.

If Jesus had defeated the Romans life would have been better for those people but because of his death on the cross, eternal life and a relationship with God is possible.

If you were a part of that crowd 2000 years ago do you think that you would we have chosen differently?

When we are in pain, the circumstances and emotions of what we are going through can consume us. Sometimes, all we can see is the particular problem and as a result we then cry out to God asking him to save us from the particular situation. 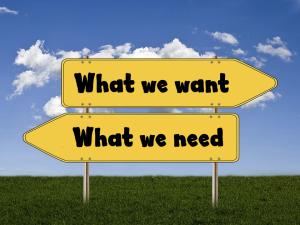 Sometimes we ask that Jesus acts in the way we want rather than perhaps the way that we most need!

Instead of just asking Jesus to take away our pain, I believe that we should call on and pour out our heart to him in order to express the pain we are feeling. At this point, we should be asking Jesus how he wants to lead us forwards.

Jesus knows and understands our felt needs, but he also knows our real needs and the real needs of the people around us.

Jesus died to save the whole world and not just me or you and so we need to accept that meeting our felt needs isn’t necessarily very high on Jesus’ priority list in comparison to the salvation of the whole of humanity.

2000 years ago, Jesus could have been rescued the Jews from the Romans. If he had done so he would have been incredibly popular (except with the Romans of course!) but in not giving his life as a sacrifice, we would all still be separated from God.

Would we like Jesus to give us what we Want or what we Need?

I am hoping to write something each day to explore something that happened during the lead up to the first Easter Sunday. If you are interested in finding out more then you might find the posts I have written during this and previous years about this helpful.

Hi, my name is Graeme and I’m married to a very patient wife. We have 4 children, 2 rabbits, a terrapin (and not a lot of peace and quiet!). I’m a Regional Minister for the Eastern Baptist Association in the UK (the views expressed in this blog are my own) and I am especially interested in making Church accessible to people who have no church background and also in how we disciple people in order to equip them to live out their faith in the 21st Century.
View all posts by honestaboutmyfaith →
This entry was posted in Easter week explained, Faith, Holy week, Holy week explained and tagged Crucifixion, Easter, easter week explained, God doesn't exist to serve my needs, God is not a vending machine, Good Friday, holy week explained, Palm Sunday, surrender to God, what is Palm sunday all about?, why did Jesus die?. Bookmark the permalink.

2 Responses to Would we like Jesus to give us what we Want or what we Need?