Posted on September 22, 2016 by honestaboutmyfaith 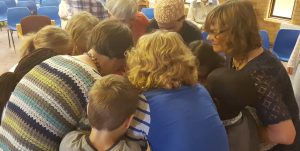 Jesus said that where two or three of his followers were gathered that he would be among them or in the midst.

At a recent church service, we learnt about this through an activity.

I invited the people who wanted to join in, to form a tight circle and then someone else had to attempt to break in. You can see young Nathaniel in this picture trying to force his way in, without much success. In the end he realized that brute force wasn’t going to work and so he crawled through someone’s legs.

We then played a second game where the person had to start in the circle with the aim of breaking out of the circle. I asked Matthew (who volunteered to break out) to go to the back of the church whilst I discussed strategy with the people making up the circle. I then primed them by saying that when I said go, that they were to turn their backs on Matthew and ignore him, not making any attempt to stop him leaving.

We got Matthew in the circle and then counted down, THREE, TWO, ONE, GO and as we did, Matthew was tensing his muscles and getting ready to throw himself at the circle. As the people in the circle turned away from him he looked confused before walking, easily out of the circle.

I then asked him how it had felt being ignored and he said ‘it felt like they all didn’t like me’.

When we gather, Jesus is among us, but do we want him to be there and do we acknowledge and look to him?

If Jesus was to wander away, would we care? Do our actions ever make it look like we really don’t like Jesus being around?

Imagine another game and how much worse it would be if as the people in the circle had ignored Matthew that they had been shouting out how great he was at the same time.

Is it possible to shout praise about but to ignore someone at the same time?

I wonder if that is how we treat Jesus a lot of the time?

He is among us, but we can easily just talk about him instead of talking with him.

He is among us, but we can easily just listen only to one another rather than listening to him.

He is among us, but we can easily just look for good ideas rather than looking to and being led by Jesus.

So, Jesus is really among and with us! How will that make a difference to us and to the people around us?

You can read other posts that I have written giving ideas and examples about creative communication by clicking here.

Hi, my name is Graeme and I’m married to a very patient wife. We have 4 children, 2 rabbits, a terrapin (and not a lot of peace and quiet!). I’m a Regional Minister for the Eastern Baptist Association in the UK (the views expressed in this blog are my own) and I am especially interested in making Church accessible to people who have no church background and also in how we disciple people in order to equip them to live out their faith in the 21st Century.
View all posts by honestaboutmyfaith →
This entry was posted in creative communication, discipleship, Faith, God is with us, Learning, Life experiences and tagged creative communication, creative learning, Jesus be the centre, Matthew 18.20, somewhere in the middle, where 2 or 3 are gathered in my name. Bookmark the permalink.