Have you ever thought about how tragic the Nativity Story is?

Posted on December 11, 2015 by honestaboutmyfaith

The version of the nativity that is often presented in church is a very nice, clean and happy story but have you ever considered how tragic that the Christmas story really is?

Mary was unmarried and pregnant and the punishment in her culture for sex outside of marriage was death. Mary felt privileged to give birth to the son of God but that privilege came with a price as she was persecuted and rejected by the people in her community.

Joseph heard the news that his fiance was pregnant and he knew that he was not the father. He lived briefly with the feeling of betrayal and disappointment until an angel filled him in on what was happening. Although Joseph was convinced that the baby was the son of God, to the wider community that he was a part of, he looked a fool who was being taken advantage of. People would have looked at Joseph and Mary and assumed that they had turned their backs on God because of what people thought were immoral actions. It is ironic that the complete opposite was the reality; they were serving God and Joseph and Mary’s actions of grace are a picture of who God is. 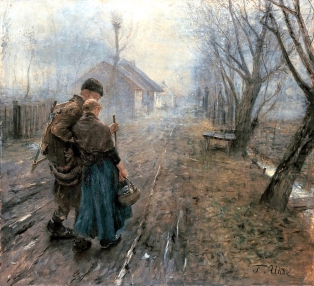 Fritz von Uhde: Journey to Bethlehem 1890 (This work is in the public  domain).

Mary had to make a long trip (around 70 miles) when she was heavily pregnant. The Bible doesn’t mention a donkey and so we don’t really know if there was one, if she walked or if perhaps there was a cart. What we do know is that the journey would have taken a few days and that it must have been deeply upsetting for Mary to be forced to travel so far.

This painting by Fritz von Uhde really captures the true essence of Joseph and Mary’s journey. The picture screams poverty, exhaustion, tragedy and struggling on. It gives us a glimpse into the reality, trauma and tragedy of the journey which is so different to the Nativity Play where Mary and Joseph stroll around a bit while the choir sings little donkey.

Joseph and Mary traveled to Bethlehem where Joseph’s family was from and yet no relative was willing to take them in and so Mary gives birth in the place where the animals are kept. Jesus is born in absolute squalor and poverty!

Mary, Joseph and Jesus became refugees as they were forced to flee their homeland for fear of their lives after Herod started to slaughter baby boys.

This isn’t a happy, shiny nice story, this is real, hard and pain filled life.

Focusing on the reality of the Nativity makes the birth of the Messiah all the more profound. It is in amongst all of this this stress and hardship that Jesus the light of the world is born! Into the darkness he comes, bringing life and hope.

In the midst of rejection and ridicule God brings security.

In the midst of what seemed like a randomly enforced journey, God brings purpose.

In the midst of exhaustion, God brings strength.

In the midst of poverty, God brings fulfillment.

In the midst of fleeing for safety, God brings peace and hope.

In the midst of what seems like chaos, God sends people and signs to remind Mary & Joseph that he was at work and that Jesus is the son of God.

If you take Jesus out of the Christmas story then it is probably one of the most tragic stories you will ever hear. We need to understand this and see that God is at work in the pain and uncertainty of life. If we follow Jesus, he doesn’t promised us an easy ride but he does promise that he will be with us, leading and giving us what we need to carry on.

There are a lot of terrible things happening in the world at the moment and our prayer should be that we would look to Jesus and the hope and peace that only he can bring in amongst the evil that we see.

We need to remember that it was into this mess, stress, angst and darkness, that the light and the hope of the world was born.

May Jesus and his hope be born in you today. The Light really does shine the brightest in the darkest places.

You might also find Were Mary and Joseph disappointed with God?, Do you think that Mary cried? and No Room at the Inn or Somewhere Else? helpful.

Hi, my name is Graeme and I’m married to a very patient wife. We have 4 children, 2 rabbits, a terrapin (and not a lot of peace and quiet!). I’m a Regional Minister for the Eastern Baptist Association in the UK (the views expressed in this blog are my own) and I am especially interested in making Church accessible to people who have no church background and also in how we disciple people in order to equip them to live out their faith in the 21st Century.
View all posts by honestaboutmyfaith →
This entry was posted in christmas, Christmas story, Faith, Incarnation and tagged birth of Jesus, Christmas story, first Christmas, God at work, how to respond when we are stressed, In which situation is God at work?, incarnation, nativity, nativity story, The light shines the brightest in the darkest places, why was jesus born in a stable. Bookmark the permalink.

1 Response to Have you ever thought about how tragic the Nativity Story is?