Jesus died on the cross, so why do we call it Good Friday?

Posted on April 3, 2015 by honestaboutmyfaith 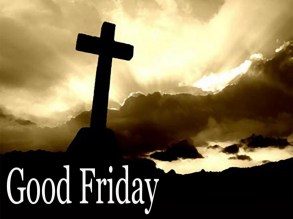 So, today we remember that a man was beaten, tortured, nailed to a cross and left to hang there until he died.

So why on earth do we call it Good Friday?

Shouldn’t it be called ‘Bad Friday’ or ‘Sad Friday’?

When the film ‘The Passion of the Christ’ was released I remember listening to film critic Mark Kermode describing it as a horror film and when you think about it, this is a really accurate description. The death of Jesus was horrific and if we looking just at the nature of Jesus’ death then it is definitely a BAD and not a GOOD day of remembrance.

What makes it Good Friday is the reason why Jesus died.

The Bible says that our sin separates us from God but the good news is that Jesus died to offer freedom and cleansing from sin.

Once we were far from God and we couldn’t get to him 😦 . Instead of turning his back on us, though God sent his son Jesus to show us who God is and to open the way for us to get to him through his sacrificial death on the cross. The death of Jesus saves us and this is really something good and worth celebrating because without his sacrifice we could never know God and spend eternity with him.

Christ was offered once for all time as a sacrifice to take away the sins of many people. He will come again, not to deal with our sins, but to bring salvation to all who are eagerly waiting for him. (Hebrews 9.28)

This isn’t just good Friday, it is amazing Friday, ecstatic Friday, awesome Friday. What was so bad for Jesus is so amazingly good for us.

Jesus died that we could truly live in freedom.

On Palm Sunday the people shouted Hosanna, they wanted Jesus to save them and that was exactly why he came.

Jesus overturned the tables in the temple because he felt passionately that it should be free for people to get to God. He believed in this so much that he gave his life to make that freedom available for us all to receive.

Jesus had given his followers the bread and wine as a reminder that his body was broken and his blood was shed to save us.

Jesus endured so much as he approached his death and he endured it until the end because he loves us.

Because of the joy awaiting him, he endured the cross, disregarding its shame. (Hebrews 12.2)

While Jesus hung on the cross he was able to remain there because he believed that the offer of salvation for all was something worth dying for.

As he neared death, Jesus shouted,

Christians sometimes say that God the Father had to turn away because he couldn’t look upon the sin of the world which Jesus was carrying in that moment. I find this hard to believe and it’s worth being clear that this is one interpretation of Jesus’ words and it isn’t not something that the Bible explicitly says. I see this statement more as a cry of anguish from a dying man, much the same as the ‘let this cup of suffering be taken from me’ prayer that I wrote about yesterday. Jesus felt broken and in his agony he couldn’t feel his father’s presence but despite his feeling of separation from God, he was willing to go through with his sacrifice, such is his love for us.

As Jesus died the curtain in the temple (it separated the most Holy Place where God’s presence was) was torn from top to bottom. God was announcing that the barrier of sin was broken, and that we are all now free to know him if we choose to turn to him.

I believe that God felt the same in those moments as he did those few years earlier when his voice was heard saying,

This is my beloved son with whom I am well pleased.

Jesus is amazing! Jesus is an inspiration to us all!

The Roman centurion in charge of the execution having seen how Jesus died said,

This man truly was the son of God.

Who do we think Jesus is?

I am convinced that Jesus is God who became human and that he died to save us all. He died to offer us salvation and a way back to God.

We can accept his offer by turning to him as our lord and by asking him to be our saviour by receiving forgiveness for our sins. As we do this, God’s presence (the Holy Spirit) will come and live inside us to guide and be with us through life.

Good Friday is a day when we will naturally feel sad regarding all that Jesus went through for us but ultimately it should be a day when we are glad as we focus on what Jesus died to achieve.

Tomorrow we will be thinking about Easter Saturday: Did it feel to the disciples like Jesus and God had failed?

Hi, my name is Graeme and I’m married to a very patient wife. We have 4 children, 2 rabbits, a terrapin (and not a lot of peace and quiet!). I’m a Regional Minister for the Eastern Baptist Association in the UK (the views expressed in this blog are my own) and I am especially interested in making Church accessible to people who have no church background and also in how we disciple people in order to equip them to live out their faith in the 21st Century.
View all posts by honestaboutmyfaith →
This entry was posted in Bible, Easter week explained, Faith, Holy week explained, Saved by Jesus and tagged art of celebration, brought near by the blood of Jesus, easter week explained, Ephesians 2 13, Good Friday, Hebrews 9 28, holy week explained, jesus died for us, Jesus died once for all, jesus saves us, Saved by Jesus, why did Jesus die?, Why is it called Good Friday. Bookmark the permalink.

14 Responses to Jesus died on the cross, so why do we call it Good Friday?