Palm Sunday: What is that all about?

Posted on March 29, 2015 by honestaboutmyfaith

Palm Sunday is a time when we remember that Jesus rode into Jerusalem and that the crowd went wild, laying palm leaves and their coats on the floor.

Have you ever wondered what was going on and what it was all about?

As Jesus rode into Jerusalem on a donkey, why did the crowd go wild? 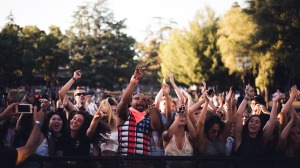 Imagine a crowd cheering wildly, perhaps at a concert or at a sports event. People celebrate, cheer and get excited becasue they are seeing something that they find inspiring.

People can lose themselves in a moment in the presence of great talent, skill and charisma. They are ecstatic becasue they have encountered greatness!

The crowd 2000 years ago saw something in Jesus and they began to cheer. In one way, this was quite strange because Jesus was riding a donkey not a warhorse. When people ride a donkey, they often look ridiculous rather than important or inspirational. Even though Jesus chose to arrive in this way, the crowd saw something in him beyond his appearance and circumstances and they cheered and celebrated.

In modern day concerts or sports events, the performers are protected by safety barriers. The crowd can watch and go wild but they have to keep their distance. Jesus rode into Jerusalem to absolute chaos as the crowd went wild and surged forward to meet him.

Why did the crowd put their coats and Palm leaves on the floor for Jesus to ride over?

The crowd were so excited that Jesus had arrived that they wanted him to feel welcome. They produced their equivalent of a red carpet at great cost to themselves and to the people who were going to have to wash the coats after the donkey had ridden over them. 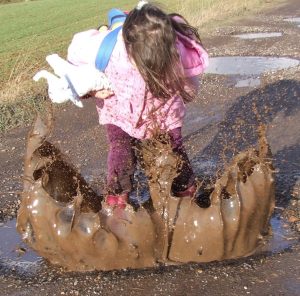 We went for a family walk recently. There had been a lot of rain and it was fairly muddy and so we made sure that our girls had boots on. As they jumped in some puddles I encouraged them to splash more and to jump higher becasue I wanted to capture the splash in a photo .

After a while, my daughter’s trousers were soaking and filthy. She had had fun and acted on impulse (and in response to some enlargement from me), but somebody was going to have to clean up the mess. Oops!

Can you imagine the people arriving home on that first Palm Sunday trying to explain why there was Donkey poo and hoof prints on their coats?

What was it about Jesus that caused the crowd to praise him in such a costly way?

Why did the crowd shouted Hosanna? 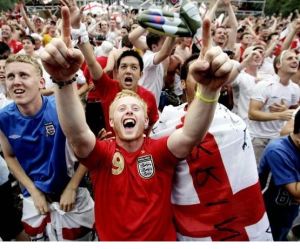 It’s like when you team has just scored a winning goal and the events you have witnessed are so overwhelming and exciting  that you cannot help but to celebrate.

The crowd shouted hosanna because they were really excited by what they could see in Jesus. 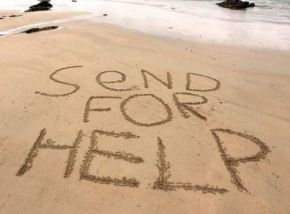 The Jews were living under Roman occupation and they were expecting God to send the Messiah who would set them free. The people of Jerusalem clearly believed that Jesus was the Messiah and they went wild as they considered that their freedom might have arrived.

The crowd cheered for Jesus and asked him to save them at the same time.

So, that is what Palm Sunday is all about, you can read about it yourself in the Bible by clicking here. I’ll leave you with few thoughts about what it could mean to us today?

Does the thought of Jesus make you want to go wild with excitement? If we understand who Jesus is then it should. I hope as you read this series of blog posts that you will see more clearly who Jesus is and that you will be inspired to follow him.

Jesus was going to save the Jews, but not in the way they expected. A few days later, Jesus died on the cross to deal with the sin that separates us from God. The Jews remained under Roman occupation but they (and we have this opportunity as well) were given the freedom to know God.

Will we let Jesus save us in the way we need, rather than the way that we want?

We can talk to God about the many things we want, but I hope that in the wend that we all turn to him and listen as he shows us what is really important?

Will we worship Jesus in a way that is costly to us? Don’t worry, muddy coats are unlikely to be required!

How will we show Jesus what he really means to us?

Throughout the week, I’ll be writing a series of blogs called ‘What is that all about?’ that help us to think about the events that led up to Jesus’ death and resurrection.

The Trashing of the Temple: What is that all about?

Hi, my name is Graeme and I’m married to a very patient wife. We have 4 children, 2 rabbits, a terrapin (and not a lot of peace and quiet!). I’m a Regional Minister for the Eastern Baptist Association in the UK (the views expressed in this blog are my own) and I am especially interested in making Church accessible to people who have no church background and also in how we disciple people in order to equip them to live out their faith in the 21st Century.
View all posts by honestaboutmyfaith →
This entry was posted in Bible, Easter week explained, Faith, Holy week explained, salvation, Saved by Jesus, worship and tagged celebrating, easter week explained, help me, holy week explained, Jesus rode on a donkey, jesus saves us, one direction, Palm Sunday, rescue me, sos, splashing in muddy puddles, What does hosanna mean?, what is Palm sunday all about?, who is jesus, why did people put palm leaves and coats on the floor. Bookmark the permalink.

8 Responses to Palm Sunday: What is that all about?