Posted on January 12, 2015 by honestaboutmyfaith 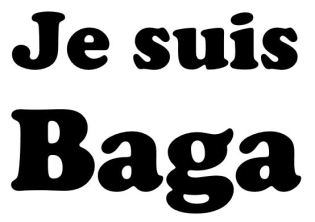 There were incredible scenes in France this weekend as millions marched across the country to demonstrate their unity after the attacks there this past week. The scenes were incredible as people walked together to remember those who had been killed. They were demonstrating that they were not afraid and that they wouldn’t tolerate attacks on their country and way of life.

17 people were killed in France and the march was a wonderful way of remembering and honouring them.

Over the weekend an estimated two thousand people were slaughtered in and around the town of Baga in northern Nigeria by Boko Haram. Many more have been displaced and have had to flee to try to find some safety. You can read more about it here.

An estimated two thousand people were killed in Nigeria, no one marched and there has been very little media coverage and I have not seen any ‘Je suis Baga’ signs on TV.

What is the matter with us?

Are some people’s lives more valuable than others?

I hope that none of us really believe this is true but this is the message that the media is sending out.

I guess that some people would say that the balance of news coverage was appropriate because these sorts of things don’t usually happen in France but they may be more common in other parts of the world. It’s a bit like saying that no one would report that it’s snowing in Antarctica but it would be reported if it happened in the Sahara because it would be such an unusual event there. The logic of this argument is clever until we remember that this is all about people and if the slaughter of thousands isn’t worth some news coverage then that is incredibly sad.

The truth is that we do find it hard to continually focus on tragedies and so it’s easier to hide from them. When you think this through it should give us a fresh admiration for God who sees all that is going on and whose heart breaks for a world in such pain and turmoil.

I think the real issue about the balance in coverage regarding these two tragedies is that the attacks in France are closer to home. We know that atrocities are committed in many countries that feel far away and that these sorts of things are usual there but thankfully not here. When attacks like these happen in a neighbouring civilized country we realize that it could have been us.

One of the ironies of the statement ‘Je suis Charlie’ is that whilst it is a positive statement of solidarity, it is also an admission of our vulnerability, the target really could have been us!

How can things change?

How can we express our frustration?

How can we declare that every life is worth something and that all people are of equal value?

The main change has to be in us. Instead of hiding from the tragic events happening in the world we need to face up to them as realities that are happening to our fellow human beings.

We can spread the news of what is happening and this was beginning to happen on social media yesterday.

We can also give to make a difference and this could be to a charity that works with refugees to help those affected by war and terrorism. People are also dying every day from a lack of clean water and treatable diseases, there are plenty of opportunities to give (even a small amount) in a way that saves lives.

My thoughts and prayers are with all of those who have lost loved ones in Nigeria, France and elsewhere.

Hi, my name is Graeme and I’m married to a very patient wife. We have 4 children, 2 rabbits, a terrapin (and not a lot of peace and quiet!). I’m a Regional Minister for the Eastern Baptist Association in the UK (the views expressed in this blog are my own) and I am especially interested in making Church accessible to people who have no church background and also in how we disciple people in order to equip them to live out their faith in the 21st Century.
View all posts by honestaboutmyfaith →
This entry was posted in Everyone is valuable, Faith, Life experiences, Loving one another and tagged everyone is valuable, je suis baga, je suis charlie, media bias. Bookmark the permalink.