Posted on December 24, 2014 by honestaboutmyfaith 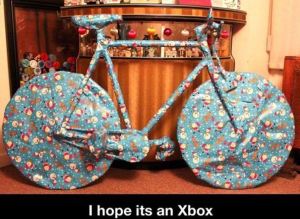 There once were some parents who wanted to buy their child the perfect Christmas present. In the end they decided to get a bike which was something that he really needed and because they cared, they put a huge amount of time and effort into getting the bike that would be perfect for him.

Christmas morning came and the child came downstairs excitedly and unwrapped his beautiful bike. As he unwrapped the paper and opened the box that his new shiny bike was in he let out a gasp of delight. He pulled the bike out of the box and then he put it down on the floor and climbed in to the box where he spent the rest of the day playing with the wrapping paper. When his parents asked him if he wanted to try his new bike he said no, because he just wanted to play with the paper.

The boy had a great Christmas doing what he was sure was the most fun. His parents were heartbroken as they saw the amazing present that was just what he needed being ignored.

Christmas is about the birth of Christ. All the other stuff such as family, friends, trees, food, presents and even Brussels sprouts are great, but they aren’t the point. We can enjoy all of them but I hope we don’t forget Jesus.

Jesus is just what we need! Joseph was told that Jesus would save us from our sins and because Jesus came to deal with sin, the barrier between us and God is broken. Because Jesus came, we have the opportunity to know God now and forever and this really is an amazing opportunity.

It cost Jesus everything to come, the least we can do is remember and celebrate his coming into the world.

Hi, my name is Graeme and I’m married to a very patient wife. We have 4 children, 2 rabbits, a terrapin (and not a lot of peace and quiet!). I’m a Regional Minister for the Eastern Baptist Association in the UK (the views expressed in this blog are my own) and I am especially interested in making Church accessible to people who have no church background and also in how we disciple people in order to equip them to live out their faith in the 21st Century.
View all posts by honestaboutmyfaith →
This entry was posted in Being honest about our faith, christmas, Christmas story, Faith, Incarnation, Relationship with God, Saved by Jesus and tagged best christmas present, he will save his people from their sins, Jesus is God's gift, nativity, playing with wrapping paper, Saved by Jesus, the perfect christmas present, you shall call him jesus. Bookmark the permalink.

3 Responses to The Perfect Christmas Present