Posted on October 18, 2014 by honestaboutmyfaith 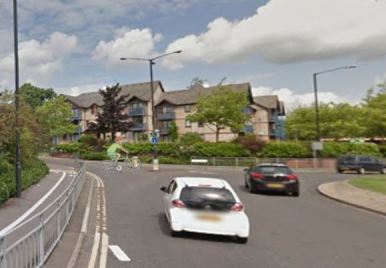 As I drove around the corner the cyclist was making blinking signals at me with his hands. I think he may have been saying why wasn’t I indicating but he may also have been doing the actions to twinkle, twinkle little star.

This photo shows where this happened and I have even inserted a cartoon cyclist (ooh aren’t I clever!) so you can see where the blinking took place.

So, I was about to turn left into the road and so I indicated to turn left. The roundabout was full of cars and so I had to manoeuvre to the left of a car to get towards the turning as I straightened up near the road I was turning into, the indicator turned itself off. (This happened when I was about a car length in front of where the white car is in the photo). I felt bad that the cyclist thought I hadn’t indicated until I realized that he had set off into the road without even looking and so whether I was indicating or not was irrelevant.

The blinking cyclist was sure I was in the wrong, but on this occasion I wasn’t. It’s funny how easily we blame others without thinking things through. We can spend our lives convinced that the problem is with everyone else and if we have this attitude then we never learn everything. The sooner we accept that we are human (yes, you really are) and that as a result we make mistakes the better. If we have this attitude then we can learn and grow and as a consequence we will make fewer mistakes.

I was watching the cyclist and saw him coming and so an accident was averted. It’s obvious that we need to watch carefully what is going on around us as we drive on or cross roads, but it is also important in our everyday lives. Think about some people who you have spent time with recently. How are they? What is going on in their lives? When we were with them were we aware of them or were we just wrapped up in our own little world?

As we travel through life today, may we be aware of what is going on around us and may we be willing to admit when we get things wrong so that we can learn from those mistakes.

Hi, my name is Graeme and I’m married to a very patient wife. We have 4 children, 2 rabbits, a terrapin (and not a lot of peace and quiet!). I’m a Regional Minister for the Eastern Baptist Association in the UK (the views expressed in this blog are my own) and I am especially interested in making Church accessible to people who have no church background and also in how we disciple people in order to equip them to live out their faith in the 21st Century.
View all posts by honestaboutmyfaith →
This entry was posted in Faith, Life experiences and tagged admit when you are wrong, be aware of what is going on around you, cyclist, driving, who is to blame. Bookmark the permalink.

4 Responses to The Blinking Cyclist