The Price of Football: What Christianity can learn from football fans?

Posted on October 16, 2014 by honestaboutmyfaith 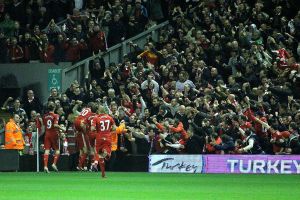 The BBC Sport’s ‘The Price of Football’ study was released yesterday and it attempts to analyse what people are paying to go and watch football. ‘Even though our prices have gone up, our stadium is full and so we must be getting something right’ was a comment I heard from one club representative defending their price rise.

Being a sports fan can be a little like being a drug addict with match day being the fix (and hopefully, but not always, a high). When people get to the stage of paying to regularly watch a football team, it’s serious. It’s not like picking a supermarket where we are only loyal whilst that supermarket meets our needs and our preferences. Being a true football fan feels more like a contractual obligation, with a binding commitment being made by the fan.

I heard on the news that 71p out of every £1 generated by football clubs is being spent on wages. Think about that for a moment, some of the richest people in the country are getting richer at the expense of their fans. Come and follow me, but it will cost you a lot and we mean A LOT! According to the report, ‘the average price of the cheapest tickets across English football has risen at almost twice the rate of the cost of living since 2011’. The thing is that the clubs know that the fans will pay the higher prices because they are committed to the club.

Why are fans so fanatical about football?

Football gives you a real buzz. It brings out the passion in people as they feel able to let themselves go with the rest of the crowd cheering on their team. Watching football can be an emotional rollercoaster. I remember watching the 1999 champions league final with a Man United supporter and he was really miserable as the match entered injury time with his beloved team losing 1-0. A few minutes later he was dancing around my living room as two quick goals from United brought them an astonishing victory.

We need community and acceptance. I would imagine that very few people go to football matches alone and there is a real sense of togetherness amongst the fans in a crowd. There are very few places where men will sing together and feel that it is normal and a football fan feels accepted even when they are shouting, singing or taunting the opposition. Being part of the crowd gives a security that allows a person to let themselves go.

We all need something that is greater than us. Sometimes footballers show skill that takes our breath away. It is usually in a creative goal or someone going past other players with the ball but it can also be in a crunching tackle or a goal line clearance. Fans look up to the players who do these things that we cannot and we cheer them on.

What can Christians learn from football fans?

When I meet other church leaders, they often tell me that people aren’t as committed as they used to be. This may generally be true, but I think that there is a lot we can learn from football fans and their commitment

What happened to the buzz of following Jesus? For some, Christianity has been perverted into a religion about following rules or just doing the right thing? Is our faith a passion or something that we try to dutifully follow because we ought to? The role of church leaders is not to pressure people to fulfil their personal vision for their church, they are called to help people to be passionate about Jesus. The answer isn’t better projects or more rotas, we need to get one another excited about knowing, following and being led by Jesus.

True community is about much more than a Sunday service. We have turned Christianity into something that is neat and tidy. Turn up to church once a week, join in with a few church projects, read your Bible and pray and you’re an okay Christian. The early church had a deeper level of relationships than this. How are we committed to each other? Football fans stand together in good times and bad, is the same true of Christians? Will we make time to be with people and to live life together? Our Sunday gatherings are often more like going to a concert or hearing a lecture than they are about being a community or family together. How can we worship together in a way that we can inspire one another?

We need something that is greater than ourselves. Every football fan knows what it is to feel deflated and let down. When we make our faith about how great our church is then we are also lining up our?? followers for disappointment. If you are looking for someone greater than yourself, then I can tell you that that person is not me, it is Jesus!Jesus called people to follow him and thousands flocked to him but he never took a penny, drachma or denarius from them. He inspired people but he also cared about them and their needs rather than taking what they have from them.

Loyalty to Jesus. Some Christians treat church and faith like a pick and mix in a sweet shop. Part of the fruit of the spirit is faithfulness, but faithfulness has been eroded by consumerism. A typical modern consumerist attitude is, ‘If my church doesn’t suit me then I’ll worship elsewhere’. Or, ‘If the Bible is too challenging I’ll ignore that bit and focus on a part I find easier’. Fans will stick with their team to the end, will we be committed to and loyal to Jesus?

Paying the price. What kind of Christianity are we living? The price of following Jesus can be high in terms of life changes and pressures we can face.  Will we pay that price?

Hi, my name is Graeme and I’m married to a very patient wife. We have 4 children, 2 rabbits, a terrapin (and not a lot of peace and quiet!). I’m a Regional Minister for the Eastern Baptist Association in the UK (the views expressed in this blog are my own) and I am especially interested in making Church accessible to people who have no church background and also in how we disciple people in order to equip them to live out their faith in the 21st Century.
View all posts by honestaboutmyfaith →
This entry was posted in church, consumerism, discipleship, Faith, Jesus and tagged community, cost of discipleship, discipleship, fellowship, follow Jesus, football fans, loyalty, passion, the price of football study. Bookmark the permalink.