Posted on September 29, 2014 by honestaboutmyfaith 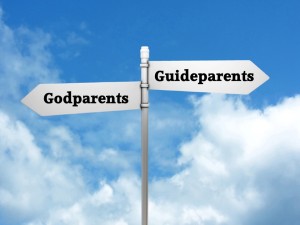 I had the privilege of leading a service of blessing for two lovely children during the weekend.

The family involved had some friends who they wanted to be Godparents but who aren’t Christians. As I understand it they were willing to compromise and take on the role anyway but I made the decision to include the phrases Godparents and Guideparents in the ceremony.

It felt important to me to meet people where they are instead of expecting them to make promises that they can’t keep because they don’t believe them. Both the Godparents and the Guideparents (they stood together and I didn’t say which were which) promised to support the children in life and in their exploration of faith. We should all be willing to support those we care about on a faith journey whether we share their faith or not. If a large part of the traditional Godparent role is to support a child as they grow, then it seems a shame to exclude people from this because they have no faith.

One of the things you notice about Jesus in the gospels is the way he meets people where they are spiritually. People didn’t have to fulfil any criteria to be around or to talk to Jesus. In fact, the people who were separate from the Jewish religion at the time felt welcomed by him rather than excluded. As Jesus met with these people though they did understand what following him meant and the sacrifices that they would have to make in choosing to turn to him as their Lord. My belief is that an open and accepting welcome linked with clear teaching and guidance is the way Jesus operated and that it is the way that we should follow.

Although we had Guideparents, the rest of the blessing service and promises were the same.

1. We thanked God for the children and affirmed they are God’s gift to us.

2. We asked God to watch over and to bless the children.

3. The parents promised to encourage their children as they explored the Christian faith

4. Those present had the opportunity to commit themselves to encourage and support the family.

My prayer is that the people who came to the service would have been touched by the presence of God. That they would reflect on what they heard and perhaps consider talking with God in their everyday lives as a way of exploring who God is. (I talked about a blind trail and what it teaches me about following and trusting in God).

I wonder what obstacles we put in the way of people hearing about and following Jesus for themselves?

A mother was praying that her son would become a Christian. ‘Please God remove anything that is stopping him turning to you’ she prayed. There was puff of smoke and when it cleared the mother was gone.

When we are very religious or if we have lots of rules that aren’t things that Jesus taught, then we can put people off exploring what following Jesus means. I want to introduce people to Jesus, not a religion or a philosophy. I want people to have the opportunity to explore what following Jesus means, not give them hoops to jump through to reach the place of being able to find out more.

How can we remove any obstacles we have put in the way of people finding Jesus?

How do we meet people where they are in the way that Jesus did?

So, Godparents or Guideparents? If I’m honest, I want Godparents, but I am willing to meet and work with those who are only able to be Guideparents. My prayer for them is that within the process that this involves that they would discover what it means to know God for themselves.

This is the video we finished the service with. May we all know that God is with us always.

Hi, my name is Graeme and I’m married to a very patient wife. We have 4 children, 2 rabbits, a terrapin (and not a lot of peace and quiet!). I’m a Regional Minister for the Eastern Baptist Association in the UK (the views expressed in this blog are my own) and I am especially interested in making Church accessible to people who have no church background and also in how we disciple people in order to equip them to live out their faith in the 21st Century.
View all posts by honestaboutmyfaith →
This entry was posted in acceptance, Being honest about our faith, church, Faith, God is with us, God loves us, grace, Life experiences and tagged acceptance, belonging befroe believing, child blessing, Godparents or Guideparents, Jesus friend of sinners, let the children come to me. Bookmark the permalink.