The Light Shines the Brightest in the Darkest Places

Posted on September 22, 2014 by honestaboutmyfaith

Sam was in the dark and he was terrified. The day had started so well as he and some friends had set off to explore a local cave system. As they had entered the dark unknown they felt a strange mix of excitement and fear. They knew that what lay before them could be a great adventure but the pitch black within the cave made them nervous. The torches they had brought with them were powerful and this gave them confidence as they explored together.

A few hours later they were laughing and joking as they explored when one of the torches suddenly stopped working. They all felt nervous, but none of them wanted to be the one to admit it in front of the others. ‘I was just thinking that it might be time to head back’ said Sam. The others agreed saying that they had been feeling that way too. They began to walk back towards the entrance. They were silent at first but soon they were laughing and joking again as the light once again gave them the confidence to overcome their fear.

They had been heading back for the entrance for nearly as long as they had taken to walk in when their remaining torch stopped working. They froze in the darkness. ‘Stop messing about’ said Sam. ‘I’m not’ came the reply, ‘it’s broken’. Sam could hear the sound of the switch being turned on and off more quickly and frantically each time it was pressed. There was a discussion about what they were going to do, but they just couldn’t agree. They were all absolutely petrified but they were still reluctant to admit it to their friends.

Sam suddenly remembered the little pen light in his pocket that his dad had given him earlier that day. He had been too embarrassed to even turn it on when he had seen the light produced by the other torches. He told his other friends that he had it but he also apologized because he believed that it couldn’t possibly give enough light to be helpful. Sam pressed the on button on his torch and he was astonished by the result. When he had turned it on at home in a darkish room it had given a little light, but here in the pitch black caves the light seemed much brighter. Although it was nowhere as powerful as the other torches had been, the light showed the way through the darkness and the friends found their way safely out. Even though the light was so small, it did give the friend’s confidence in the darkness.

The light shines the brightest in the darkest places. 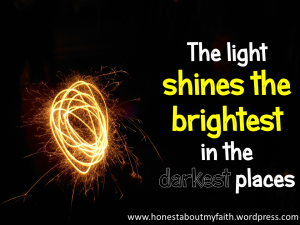 We live in a world that sometimes seems to be full of evil and darkness. Watching the news can result in us feeling sad and miserable.

It’s easy to feel overwhelmed by the darkness, but God wants us to look to the light.

His life brought light to everyone.The light shines in the darkness, and the darkness can never extinguish it. (John 1.4-5)

Next time we feel that things are dark, remember Jesus who is the light of the world. Look to him and expect his light to shine and to make a difference. Jesus is greater and more powerful than anything you are facing, but we may need to start believing that it’s true!

We need to stop dwelling on the darkness and instead look to the light.

Jesus also taught that his followers are the light of the world (Matthew 5.14-16):

“You are the light of the world—like a city on a hilltop that cannot be hidden. No one lights a lamp and then puts it under a basket. Instead, a lamp is placed on a stand, where it gives light to everyone in the house. In the same way, let your good deeds shine out for all to see, so that everyone will praise your heavenly Father.”

As Jesus fills us with his light, his light will spill out of us. We live in a dark world, so we need to consider how we will live our lives in such a way so that the light of Jesus shines out of us. You may feel that your light is so small, but remember that even the smallest light will shine brightly in the darkest places.

How can we bring light to the world around us today? 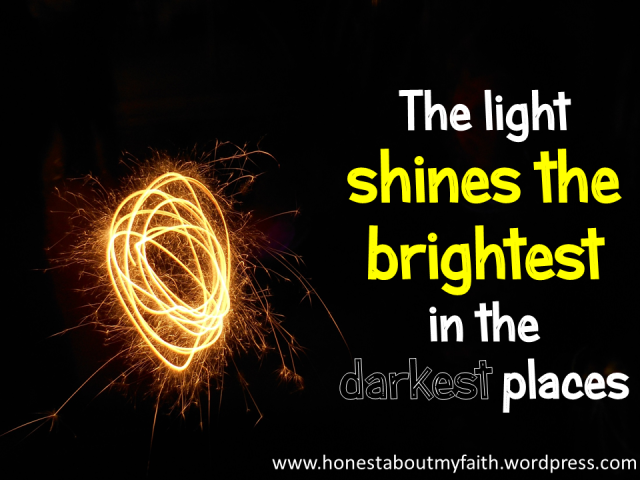 Hi, my name is Graeme and I’m married to a very patient wife. We have 4 children, 2 rabbits, a terrapin (and not a lot of peace and quiet!). I’m a Regional Minister for the Eastern Baptist Association in the UK (the views expressed in this blog are my own) and I am especially interested in making Church accessible to people who have no church background and also in how we disciple people in order to equip them to live out their faith in the 21st Century.
View all posts by honestaboutmyfaith →
This entry was posted in Being honest about our faith, creative communication, Faith, Jesus, Relationship with God and tagged a dark place, Jesus the light of the world, John 1 4-5, let your light shine, Matthew 5 14-16, short story, the darkness acan never extinguish the light, The light shines the brightest in the darkest places, this little light of mine, you are the light of the world. Bookmark the permalink.