It’s not just a lump of wood!

Posted on September 2, 2014 by honestaboutmyfaith

This is a picture of a lump of wood. I know this isn’t the most exciting blog introduction you will ever read but bear with me.

We have recently started geocaching (a kind of treasure hunt using gps). We were searching for a cache recently and the gps coordinates led us to a hedgerow and this piece of wood was in the grass. It would have been easy to ignore the wood because we were looking for a container that was too large to fit underneath something of its size. 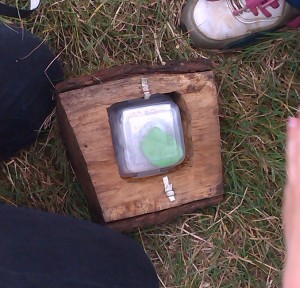 When we turned the wood over, this is what we found. In the box was a log book for us to sign to say we had found the geocache and also some items to swap. It looked just like an ordinary piece of wood but what we were seeking was there.

Do you judge people or situations based on your first impressions? Would you have walked away from that wood? Have you ever met someone and liked or disliked them and then later realized you were wrong?

First impressions really do matter but I hope that we can learn to look beyond them as we relate to other people.

After my A-levels I joined a gap year scheme called Operation Gideon which was run by Youth For Christ. I was placed in a team of four into a church in Reading to do youth work in the area. The year was so important to me and was a time when I grew a lot in my faith. My interview didn’t go so well, I learnt later that at the end of it when I had left the room that my three interviewers burst out laughing. I was an arrogant 18-year-old who thought he knew everything and in many ways I wasn’t an ideal choice for an Operation Gideon team. As the interviewers discussed who I was, and I think began to work out how to break the news to me gently that I wouldn’t be joining them, they paused to pray and they felt God say they should accept me. Instead of judging me, they chose to look beyond what they could see in front of them and my life has been better because of their choice that day.

My wife is great at geocaching, but the person in our family who has surprised us the most in her ability to locate caches is our youngest daughter. She will often walk up to a location and whilst we are searching will just say here it is. At first we couldn’t understand how she was doing it but then we realized that she is closer to the ground than we are. Her height gives her a different perspective which she uses successfully to find things that are hidden low down.

Will we seek a different perspective on life?

Will we pray that God would give us the gift of seeing people as he sees them?

I was a hopeless 18-year-old, but my interviewers saw something in me as they paused to pray and listen to God. They gained something of God’s perspective, seeing past my flaws and seeing a glimpse of who God made me to be.

Hi, my name is Graeme and I’m married to a very patient wife. We have 4 children, 2 rabbits, a terrapin (and not a lot of peace and quiet!). I’m a Regional Minister for the Eastern Baptist Association in the UK (the views expressed in this blog are my own) and I am especially interested in making Church accessible to people who have no church background and also in how we disciple people in order to equip them to live out their faith in the 21st Century.
View all posts by honestaboutmyfaith →
This entry was posted in Faith, grace, Life experiences, Listening to God, Loving one another, made in God's image, self worth and tagged first impressions, geocaching, not judging, operation Gideon, potential, prejudice, seeing past flaws, Youth For Christ. Bookmark the permalink.

1 Response to It’s not just a lump of wood!