Posted on August 21, 2014 by honestaboutmyfaith 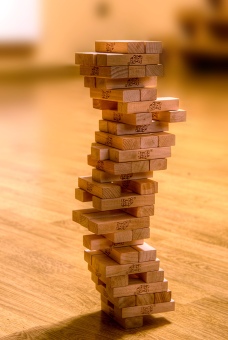 “Jenga distorted” by Guma89 – Own work. Licensed under CC BY-SA 3.0 via Wikimedia Commons.

Have you played Jenga? You start with a tower of bricks and then players take it in turns to remove a brick and place it on the top of the pile. The tower starts off very stable and ends up very wobbly before eventually collapsing.

I recently received a comment about a blog post. The comment referred to my nice story but then went on to tell me about a specific thing I had done wrong in my post. I’m not worried that I was criticised, what I found strange was that this person was certain that they were right over something that was purely about opinion and preference. What stood out to me about their comment was how it typifies how many of us encourage and criticize.

Encouragement is often vague. Talking about a nice story or nice sermon isn’t especially encouraging. Saying the difference someone made, now that’s encouraging.

Criticism is often specific. When you did … you were really wrong. You really shouldn’t say …, etc

When you have vague niceness and arrow like criticism thrown at you which is going to stick?

There is nothing wrong with criticism as long as the aim of it is to build someone up and not to tear them down. When playing Jenga I’ve reminded children not to take the final of the three bricks out of the bottom row or the tower will collapse. I haven’t said this to tear them down or destroy them, I want them to enjoy their game. How we criticise is also important, you can criticise aggressively or gently and positively. If I start shouting at a child not to move the bottom brick it is not going to help, but to say it gently with a smile on my face can help. Sometimes letting the person work it out for themselves is the best way. What will happen if they take the last brick out of the bottom row?

As part of my work I listen to and pray with people who are in need or upset. In my experience, many people are damaged by a combination of heavy criticism and encouragement deprivation. Some of us feel like a tower of bricks and that people have been pulling bricks out of (criticising) to the extent that we are about to collapse. Encouragement about specifics is a lot like putting bricks back in, bringing stability.

When a Jenga tower is wobbling, pulling a brick out can cause everything to collapse. The criticism I received recently didn’t bother me. I did take time to consider what had been said (we should always be open to the possibility we are wrong) and then I dismissed it. Having a solid foundation is essential in being able to deal with criticism. My foundation is God but I believe that a good understanding of who we are is also essential for coping in life.

Life is like a game of Jenga. How will we treat people today?

How can we encourage someone specifically (build them up)?

When you are about to criticize, ask yourself if what you are about to say is necessary or helpful. Is your aim to help the person or to make yourself feel better? When the end result of criticism is tearing down a person then keep it to yourself. If the aim is to build that person up then think about how to say it positively.

Are you a positive or negative person? Jesus said that ‘the mouth speaks what the heart is full of ‘ (Luke 6.45). What is in your heart? If you are constantly negative, then pray that God would change your heart, filling it with his presence.

What is your church community like? Is it a positive and encouraging place or is it a place of criticism? Getting the heart right is essential.

In Psalm 62, David wrote that he felt like a wobbly fence. He felt really fragile and vulnerable but he also talks positively about how he was going to find stability. 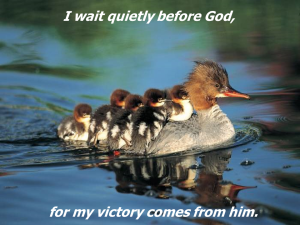 He waited quietly for God

When we are under pressure things churn around in our minds, but David chose to focus on God.

Reflecting on who God is rather than our problems helps us get things in perspective.

His hope and trust were in God 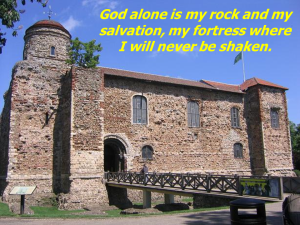 If you want a game of Jenga to last you have to build the tower on a sturdy flat surface. We need the same in life and David calls God his rock and fortress. When we just rely on ourselves at some point things won’t work out. The all-powerful God wants us to pray to him. Do we want to trust in him or ourselves? 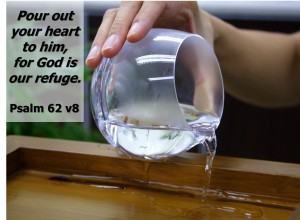 He poured out his heart to God

Crying out to God is good for us.

As we pour out all the negative, we allow space for God to pour in his healing presence.  Sometimes we get pulled down, but I am glad we can know what it is to be built up by God.

Hi, my name is Graeme and I’m married to a very patient wife. We have 4 children, 2 rabbits, a terrapin (and not a lot of peace and quiet!). I’m a Regional Minister for the Eastern Baptist Association in the UK (the views expressed in this blog are my own) and I am especially interested in making Church accessible to people who have no church background and also in how we disciple people in order to equip them to live out their faith in the 21st Century.
View all posts by honestaboutmyfaith →
This entry was posted in Bible, divided we fall, encouragement, Faith, words hurt, working together and tagged building up or tearing down, coping with criticism, criticism, encourage one another, Jenga, psalm 62. Bookmark the permalink.

4 Responses to Life is like a game of Jenga