Who does Jesus value most, the community leader or the outcast? Mark 5.21-43

Posted on August 17, 2014 by honestaboutmyfaith 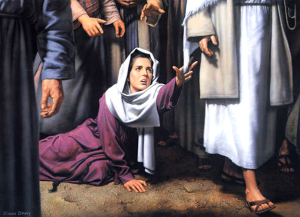 Imagine you arrive in a town and a community leader asks you to help them. Consider how important you would feel as you traveled with them? As you are walking through the town you notice a down and out reaching out for help. What do you do? This happened to Jesus and he stopped to help the outcast. Think about that for a minute, Jesus is with someone important and people are noticing him. He is being honoured and then he stops to help someone who society considers worthless.

Do you like the limelight? It’s great when a project is successful or when we feel we get recognition from the authorities for the good work we are doing. These things are good but God’s heart is for people. I know that projects help people, but we can end up focusing on how well we are doing in running our project and lose our focus on the people who God loves. People are more important than projects and an individual can be more important than a crowd.

Jairus (a synagogue leader) had a daughter who was dying and when he hears that Jesus is in town he is so relieved. Jesus heals people and Jairus is so desperate that he falls at Jesus’ feet and begs him to help.

Who gave Jesus the most trouble when he was on the earth? That’s right, it was the religious leaders like Jairus.

When Jairus reaches out to Jesus publicly he alienates himself from the other religious leaders who were against Jesus. Jairus is going to call on Jesus no matter what his colleagues think because he recognizes that Jesus can meet his needs.

Jesus is willing to help a member of the group of people who were out to get him. Jesus is amazing in the way he loves this man who should be his enemy. There is no bargaining eg. I’ll help if you get the rest of your colleagues off my back, from Jesus there is only love.

Jairus was risking his career and status in reaching out to Jesus. He was desperate to save his daughter and he was frantically leading Jesus through the crowded streets and he must have been so surprised when Jesus stopped.

There was a woman in the crowd who had suffered for twelve years with constant bleeding. She had tried medical help but had got nowhere. Her culture would have considered her unclean and she would have lived apart from society. She wasn’t allowed to touch people and yet as she saw Jesus she pushed through the crowd to touch his robe. She believed that if she touched him that she would be healed. Is prayer only words? This woman’s prayer was an action and her prayer is answered as she was healed. This woman had such faith and we don’t even know her name. She was willing to break the rules of society to reach out to Jesus, she risked criticism and revenge from people in the crowd because everyone she touched was made ceremonially unclean. I love the way that Jesus acknowledges she touched his coat, he is acknowledging he was ceremonially unclean according to the law but he didn’t care what the religious leaders thought (it’s no wonder he wound them up). Jesus’ healing and cleansing power were at work meaning that he couldn’t be unclean.

The Bible doesn’t say what Jairus felt in those few moments as Jesus stopped to help this outcast. That he says nothing may be an indicator of his shock or it may say something about his understanding of who Jesus is. Jesus has a power and authority that he saw in action. As he sees Jesus heal, did it give him hope?

As Jesus was telling the woman to go in peace, messengers arrived from Jairus’ house to say that his daughter was dead. Jesus simply encouraged Jairus to have faith and then he went with him to his home where he raised the daughter from the dead. Jairus had been through such a  rollercoaster of emotions, did he trust in Jesus all the way through or was he just desperate enough to try anything? When things go wrong it’s easy to turn on Jesus and to be angry with God. The Psalms in the Bible show us that it is okay to tell God when we are angry. When we pour out our hearts to God, we create space in our lives for God to pour his healing love. May we keep trusting in God who can do amazing miracles.

You can read what happened for yourself Mark 5.21-43. What else do you notice, what have I missed?

Some thoughts and questions.

If you feel worthless today, I hope that you realize that Jesus values you and he wants to cleanse and heal you.

People are more important than projects.

Will we risk everything, overcoming what others think, to follow Jesus?

Will we call on Jesus? Will we push through towards him?

Do we recognize who Jesus is and will we trust in him?

Who does Jesus value the most? He loves everyone equally and I hope we can grasp that he loves outcasts and outsiders as much as he loves Christians. There are many people who society seems to think have no value, but Jesus values and loves them and so should we.

Hi, my name is Graeme and I’m married to a very patient wife. We have 4 children, 2 rabbits, a terrapin (and not a lot of peace and quiet!). I’m a Regional Minister for the Eastern Baptist Association in the UK (the views expressed in this blog are my own) and I am especially interested in making Church accessible to people who have no church background and also in how we disciple people in order to equip them to live out their faith in the 21st Century.
View all posts by honestaboutmyfaith →
This entry was posted in acceptance, Faith, grace, Jesus, Kingdom of God and tagged healing, Jairus daughter, jesus, mark 5 21-43, people are more important than projects, touch the hem of his grament, woman with issue of blood. Bookmark the permalink.

6 Responses to Who does Jesus value most, the community leader or the outcast? Mark 5.21-43