When God does something weird

Posted on August 11, 2014 by honestaboutmyfaith 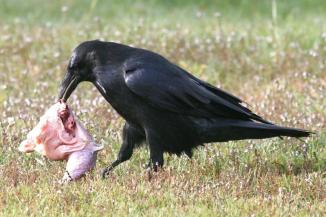 I remember talking about this Bible passage (1 Kings 17.1-7) with some friends. We were having a really spiritual discussion about how God provides until Claire said ‘yuck’. We all jumped to what we could learn from the story but Claire was approaching the story at face value and considering how disgusting it must have been to eat food delivered by ravens. Just look at the meat in this Raven’s mouth. Would you eat it? Copyright Paul Lantz used with permission.

Elijah had done what God wanted and you would have thought that God could have fed him in a better way. While they had been in the wilderness after their escape from Egypt, God miraculously fed the Jews with manna which they found on the ground first thing in the morning. Bread like food on the ground is a step up from bread from a ravens beak but God doesn’t appear to have completed a course in health and hygiene. It’s weird isn’t it, God can do anything he wants but sometimes he does things in ways that are just odd.

When my wife and I got married, we were blessed by the opportunity to live in a brand new flat in North London. I had a year left at London School of Theology and my wife was going to look for work as she had just finished her degree. We couldn’t afford the rent on a garden shed, but God miraculously provided this flat that we rented by working as cleaners for the doctor’s surgery it was next to. This was such a blessing to us because although we had no money, we did have time. Shortly after getting married and moving in Tracey got ill with M.E. and most days she couldn’t get out of the flat, let alone do any cleaning or work. We still didn’t have any money and we also now were short on time which we needed to keep the roof over our heads.

I look back on this time and thank God for his provision, but I am still confused as to why he provided in this particular way. I was studying full-time and was also working every day cleaning as well. Life was hard but there were blessings too, such as Tracey not feeling so lonely as she was able to look out the window and see a lot because we were on the second floor. Another blessing in the year was David and Sharon from our church who came and cleaned with me sometimes. Thinking about it now, the year also helped me to develop a good work ethic. God provided in a weird way but I still thank him for the way he was at work in my life even though I don’t understand why he did things the way that he did.

Elijah got to sit by a stream for months* with no one else to talk to except the ravens and God. Ravens aren’t brilliant at conversation, so Elijah had plenty of time to talk with and to continue to get to know God. God was working in an unusual way, but the result of this was that Elijah had the space and time that he needed to develop his relationship with God.

How is God at work in our lives? Will we thank him for it even when it seems weird or we don’t understand why?

You can read part 1 of this series on Elijah: Do miracles happen because God announces them or because we ask?

Hi, my name is Graeme and I’m married to a very patient wife. We have 4 children, 2 rabbits, a terrapin (and not a lot of peace and quiet!). I’m a Regional Minister for the Eastern Baptist Association in the UK (the views expressed in this blog are my own) and I am especially interested in making Church accessible to people who have no church background and also in how we disciple people in order to equip them to live out their faith in the 21st Century.
View all posts by honestaboutmyfaith →
This entry was posted in Bible, Faith, God loves us, Relationship with God, trust and tagged 1 kings 17, elijah, fed by ravens, God provides, kerith brook. Bookmark the permalink.

5 Responses to When God does something weird