The one about the blind trail

Posted on June 23, 2014 by honestaboutmyfaith 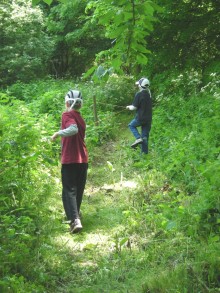 Several years ago I was a helper on a school trip and one of the activities was a blind trail. The children were blindfolded and then they had to hold a rope and follow it along the trail.

Some of the children walked along with confidence, others were scared and most felt both emotions at different points in the trail. It was great that every one of them completed the activity, even the ones who had found it the most difficult.

There was a point on the trail where the rope wound tightly around a large tree next to a slope that was a little slippy. My job was to stand there and to help keep everyone safe. If they slipped I was to be available to catch or to help them up and if they lost the rope I could guide them back to it. Apart from the one or two children who needed my help, none of them knew I was there until afterwards.

As I stood there I caught a glimpse of one aspect of what it is like to be God. Our loving father is always with us and is always ready to help and yet most of the time we aren’t aware that he is there. One child did let go of the rope and I was about to help her when she found it again. You could see the relief on her face as she began to move forwards again. I did tell her later how well she had done and that I would have helped her if she had needed it. Another child slipped and was upset, I said as gently as I could (remember they didn’t know I was there and I didn’t want to give him a heart attack) ‘it’s okay I can help you’. I took his arm and helped him up and put his hands back on the rope and he carried on.

David was in a bad place. He was in a desert literally, emotionally and spiritually. He felt thirsty for water and for God. In Psalm 63, he describes his distress and then he says to God:

7 You are my helper,
I sing for joy in the shadow of your wings.
8 I cling to you;
your strong right hand holds me securely.

The young man in the picture is my son. I was proud of all the children as they found their way around the course, but seeing my son overcome and persevere was a special moment for me as his father. The confidence with which he walked around the trail made me so proud of him. I resisted my urge to shout out ‘this is my beloved son with whom I am well pleased’. Later when I showed him the picture he said to me ‘I thought I could hear someone there’ (it must have been the camera click that gave me away because I was using all my best ninja moves).

May we learn to listen out for and to hear God our Father and to know that he is with us (even when he is using his best ninja moves). May we know God holding strengthening and guiding us as we cling to him. As we travel through life I hope that we know that God is with us and that as we persevere and grow that he feels proud as he sees all that we are achieving.

Hi, my name is Graeme and I’m married to a very patient wife. We have 4 children, 2 rabbits, a terrapin (and not a lot of peace and quiet!). I’m a Regional Minister for the Eastern Baptist Association in the UK (the views expressed in this blog are my own) and I am especially interested in making Church accessible to people who have no church background and also in how we disciple people in order to equip them to live out their faith in the 21st Century.
View all posts by honestaboutmyfaith →
Image | This entry was posted in Being honest about our faith, do not be afraid, Faith, God is our father, God is with us, God loves us, Holy Spirit, hope, Life experiences and tagged blind trail, cling to God, father God, God helper, God loves us, God supports us, God with us, held by God, listening to God, psalm 63 7-8. Bookmark the permalink.

5 Responses to The one about the blind trail