Posted on June 12, 2014 by honestaboutmyfaith 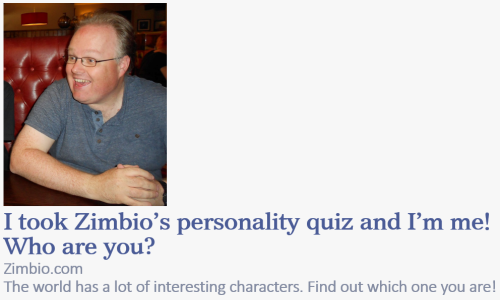 A few months ago, the Zimbio quizzes were the latest facebook fad. You remember the ones, which frozen/finding nemo/disney pincess/game of thrones (delete as appropriate) character are you?

I hope they are just a bit of fun. I would worry if anyone actually changed their life based on the results of these quizzes. I created the picture at the top of this blog to remind us that actually we are ourselves and that we shouldn’t be defined by anyone else. I’ve talked to lots of people over the years who are unhappy with who they are and lots of us know what it is to have felt inadequate and worthless at different points in our lives. My prayer is that we would become more comfortable with being ourselves?

One person who was very unhappy with who he was was Gideon (see Judges 6 in the Bible). When we first read about him he is hiding, but God calls him a mighty warrior. God tells him he will save his nation but Gideon replies that he is the least and that he can’t. It’s a weird thing that Gideon said he was worthless, his father was the local chief and he had lots of servants so he clearly was significant. Gideon said that he had no status or confidence but he told the angel to wait while he goes to cook a meal. He is the only human in the Bible to tell an angel what to do, now that’s confidence!

Gideon was created by God to be a heroic leader, so what had gone wrong? We can only guess, but it’s an experience many of us have had. At one point in my life I was told repeatedly that I wasn’t very good at explaining the Bible, however I think that explaining the Bible is one of the reasons that God created me to be me. The more times I was told I couldn’t do it the more I believed it. I was convinced of who I was until the negativity and lies chipped away at my confidence and certainty. Gideon was a heroic leader, he just couldn’t see it. I wonder what we can’t see or believe about ourselves and our potential? 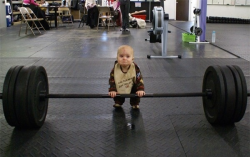 God says to Gideon ‘Go with the strength you have, and rescue Israel’. Gideon says no because he lacks the power and I think that was the right answer. God replied ‘I will be with you’. Like the child in this picture, there are times when we need to accept we can’t do everything alone. I am grateful for the skills and abilities that God has given me and I am confident in what I do because of them but I also accept that I am far from perfect and so ultimately I need to rely on God.

So who are you? Are we willing to discover and to learn to accept who we are? My prayer is that we would see more clearly why we are here and that we would allow God to transform us so that we can become the people that he created us to be. Ephesians 2.10 says

For we are God’s masterpiece. He has created us anew in Christ Jesus, so we can do the good things he planned for us long ago. 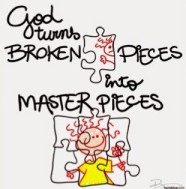 You are a masterpiece! You have real value.

God is transforming us by making us new. He is removing the hurts and damage from our lives and showing us a way to live that is better for us and those around us.

God loves and believes in us enough to call us to be involved in his work.

Hi, my name is Graeme and I’m married to a very patient wife. We have 4 children, 2 rabbits, a terrapin (and not a lot of peace and quiet!). I’m a Regional Minister for the Eastern Baptist Association in the UK (the views expressed in this blog are my own) and I am especially interested in making Church accessible to people who have no church background and also in how we disciple people in order to equip them to live out their faith in the 21st Century.
View all posts by honestaboutmyfaith →
Image | This entry was posted in change, creative communication, Faith, God loves us, Life in all it's fullness, self worth, Who am I and tagged believe in yourself, don't believe the lies, ephesians 2 10, Gideon, Gods masterpiece, I'm me, judges 6. the lord is with you mighty a warrior, negativity is destructive, who am I. Bookmark the permalink.